A Canadian team of technologists are seeking funding to launch a pocket-size device capable of detecting whether a drink has been spiked. 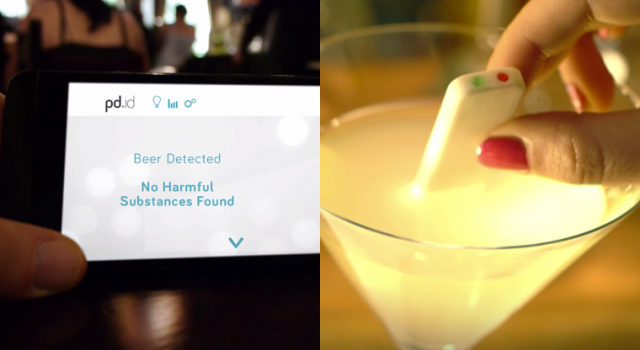 Dubbed a “date rape drug detecting lab in your pocket”, pd.id is a small, reusable device that can be place into a drink to determine if it has been tampered with.

A sample is collected in a small reservoir and a sensor then analyses the drink’s light, electrical current and temperature allowing it to determine its molecular make up in seconds.

Built-in LEDs flash green if the drink is clean, and red if it has been tampered with the device even capable of identifying the drug by working in tandem with a smartphone to access the company’s database of drug profiles.

The inventor and founder of pd.id is David Wilson who, after beating cancer, swapped his expertise in technology for nuclear medicine helping to introduce a cancer imaging camera to Ontario and collaborating on the design of a next generation molecular imaging breast camera.

Supported by a team of six other specialists, Wilson hopes the device will help protect against the dangers of having your drink spiked.

“It’s about personal protection, feeling secure and it’s about empowering our daughters, sons, sisters, brothers, spouses, partners, friends, coworkers and ourselves to be safe in an often unsafe world,” the team said on its site.

Its makers are currently seeking funding for the device through crowd funding site Indigogo, so far raising $20,000 of its $100,000 goal.

Should the funds be raised, the device could be on the market within six months priced at $75.