Listening to the right kind of music while drinking a beer can enhance its taste, according to an award-winning beer writer and Oxford professor.

That’s according to beer writer Pete Brown and Charles Spence, Professor of Experimental Psychology at Oxford University, who believe listening to a certain type of music while drinking a beer will alter its taste.

The comments follow one the largest ever multi-sensory experiments carried out by Charles Spence, professor of experimental psychology at Oxford University and Head of the Crossmodal Research Laboratory, in which 3,000 people’s reactions to taste, sound and light were studied.

The study found that change in both colour and sound while drinking can immediately affect the taste of wine by nearly 10%.

Speaking to the drinks business last month, Professor Charles Spence said: “We were astonished to see that colour and sound have such a profound effect on the taste of wine.

“We knew an effect was likely, but the results went far beyond what we were hoping for. Conducting the world’s largest multi sensory experiment meant that we were able to unequivocally show, for the first time, that colour and sound together have a far greater effect on people’s taste perceptions than light by itself.”

The theory was applied to beer at a recent beer and music matching at the Michelin-starred Indian restaurant Quilon during which Brown paired six beers with and five pieces of music chosen to suit the beer’s style and enhance its flavour.

“Both wheat beers suggested lazy summer evenings, the sun draining slowly over the distant skyline; and Blue Moon edged ahead through its, and the music’s, richly sweet timbre and notes of dreamy melancholia.”

“The grunge band’s hyper-ventilating guitar and surrealist lyrics set against Duvel’s frenetic blond bubbles and throat-grabbing, lip-wiring flavours”. Brown added: “I like to think both the beer and the track are a little bit intoxicating, dangerous and thrilling.” 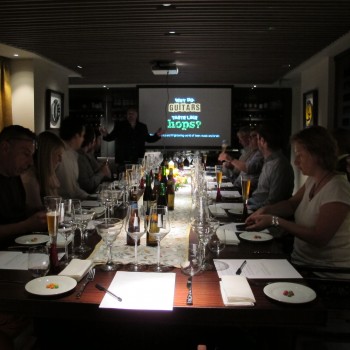 “An early acid house single incorporating the muffled voices of Peter Cook and Dudley Moore, Pete’s theory being that ‘sour’ pairs with high pitched dissonant sounds. The idea with this pairing is that both demonstrate real, quirky character, without being too extreme.”

He said: “These darker, heavier more complex beers paired synergistically with the contemplative mood of the music”. Brown added: “Both beers and tracks are complex and multi-layered, swooping and diving around your consciousness.”