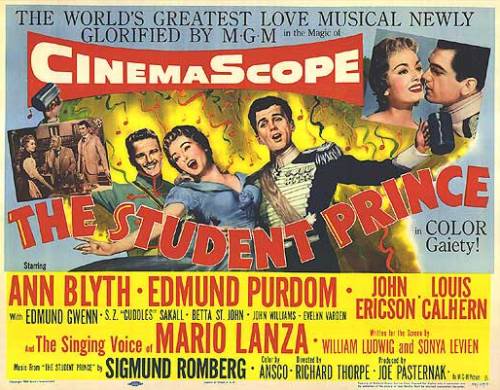 What’s this? Students drinking? Whatever next? A toga party if Animal House got it right.

In truth this is an operetta rather than a fully fledged opera and the only one in English on the list (sorry Gilbert and Sullivan fans, no “Pour the Pirate Sherry” here).

Premiering on Broadway in 1924, at 608 performances it was the most successful show of the decade. Based on Wilhelm Meyer-Förster’s play from 1901 called “Old Heidelberg“, The Student Prince proves, if nothing else, that drinking irresponsibly at university is not a modern trend.

Set at the University of Heidelberg, the story follows Prince Karl Franz of the fictional kingdom of Karlsberg who has been sent away to study in “old Heidelberg” by his grandfather the king, who’s decided that Karl is a bit of a young fogey and needs to loosen up a bit.

This he does because once he gets to Heidelberg he quickly discovers the twin joys of beer and girls.

There are many drinking songs in The Student Prince (see “To the Inn we’re Marching” here and, ahem, “Let’s all be gay boys” here) but “Drink, drink, drink!” is probably the stand out number – when Karl is introduced to that old past time of downing a pint.

Not only is it a cracking vocal performance from Mario Lanza (from the film made in 1954) but it’s also a wonderful appeal to love which, this being an opera (even a little one), is the main thrust of the story (as well as lots of beer).

Spending all his time at the pub, the Three Gold Apples, rather than at his studies, Karl quickly falls in love with the innkeeper’s daughter, Kathie.

But! Problem! He’s already engaged to Princess Margaret back in Karlsberg. Fortunately, this being a comedy, the deaths of all involved are averted but love does not quite conquer all as you might expect.

Clearly an innkeeper’s daughter is doomed never to be the wife of a prince – even if after much moonlight serenading they’re hopelessly in love with each other.

The old king falls gravely ill and Karl must go back home again to prepare for the succession and fulfil his obligation to marry Margaret. Much tearful departing follows with promises to return etc.

Meanwhile, back in Karlsberg, Margaret has been running around in secret with some other bloke called Captain Tarnitz but once Karl returns she starts to fall in love with him again anyway and ditches Tarnitz (this is a subplot left out of the film).

As Karl is still wrestling with the thought of marrying Margaret and taking control of the Kingdom, his tutor dies in Heidelberg so he and Margaret go back.

Margaret has found out about his dalliance with the barmaid and so seeks out Kathie to tell her that for the good of the kingdom, Kathie must persuade Karl she has fallen in love with another man in the time he has been away.

This she does and Karl takes it stoically, resolving to marry Margaret and rule his kingdom while remembering Kathie as his “one true love”.

Which is all very honourable but a bit of a let down for everyone concerned. One sort of gets the feeling that Margaret’s decided she’d like to be a queen after all, while Karl should just man up and marry the girl he really cares about. Then again, it wouldn’t be opera without some sort of frustrated passion.

The students meanwhile are still singing and making merry like they did before down at the Three Golden Apples – which is eminently more sensible.

The video below is from the above-mentioned 1954 film with Edmund Purdom as Karl Franz and Ann Blyth as Kathie. Mario Lanza was originally cast as Karl Franz and recorded all the singing parts but then fell out with MGM which brought Purdom on instead.

However, Lanza’s recordings were the property of the studio and so Purdom mimed all the singing.

Next time: a Czech hymn to beer
Previously: Rustic chivalry