A US candy company has launched the world’s first beer-flavoured jelly bean, riding the wave of America’s craft beer explosion. 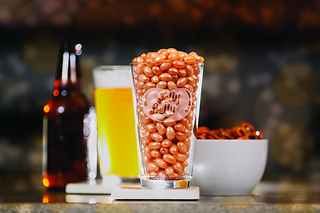 Apparently beer has been a highly-requested flavour by Jelly Belly consumers for decades.

Ambrose Lee, research and development manager for the Jelly Belly Candy Company, said: “This took about three years to perfect.”

“The recipe includes top secret ingredients, but I can tell you it contains no alcohol.”

According to its PR people, the carefully crafted candy bean has an “effervescent and crisp flavour” with an “iridescent finish”, “notes of wheat and a touch of sweetness” and an aroma that is “mildly bready.”

Jeff Brown, vice president in charge of manufacturing for Jelly Belly Candy Company, said: “Usually the factory has a sweet and fruity aroma, but when we’re making this flavour it’s just like being in an ale house.”

The new beer-bean has even found favour with Jackie Dodd, beer expert, cookbook author, and writer of the cooking with craft beer blog The Beeroness.

She said: “I love the flavours in a good beer and Jelly Belly has managed to get that from brew to bean in an incredible way.”

“Jelly Belly found a way to fit 15 pints in the palm of your hand, they deserve an award.”

The company first stepped into the jelly bean drinks market in 1977 with the creation of their Mai Tai bean.

Since then they have created the Blackberry Brandy, Strawberry Daiquiri, Piña Colada, Margarita and Mojito.

The new flavour will debut at the Winter Fancy Food Show in San Francisco and at ISM in Cologne, Germany.