A 67% beer has been created by a Scottish brewery, which already held the record for brewing the world’s strongest ale, after fans said the first was “too weak”. 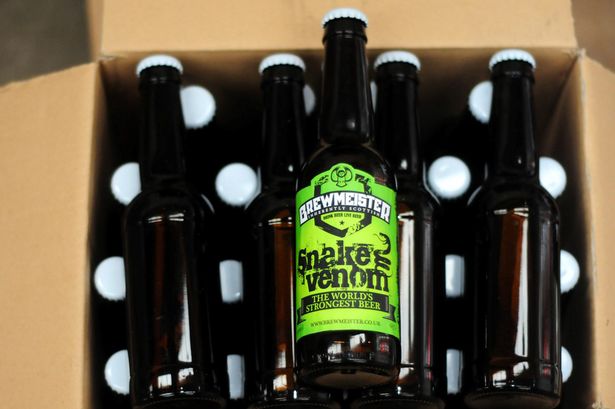 “Snake Venom” is the latest creation from Brewmeister in Moray and was brewed with smoked peat malt and two varieties of yeast, one beer and one Champagne.

Like all the beers that have pushed the abv boundaries, freezing during the fermentation process – sometime several times – is essential.

Brewers Lewis Shand and John McKenzie took nine months to create the beer which they did after some fans apparently said that 65% “Armageddon” was didn’t taste strong enough.

Speaking to the Daily Record, Shand said: “Snake Venom is definitely sharper in taste. With Armageddon, we actually tried to disguise the taste by making it quite oily.

“We thought if it was too strong, people wouldn’t like it. But the problem we found is that people said we shouldn’t have tried to cover up the intensity.

“Some even said they didn’t believe it was 65%, so this time we thought we’d go full out. We were too nice last time.”

Armageddon, released last year, effectively brought to an end the super-beer wars of 2010-12.

The battle for supremacy began in 2010 when the Aberdeen-based BrewDog launched “Tactical Nuclear Penguin” a 32% beer.

This started a tit-for-tat exchange with German brewer Schorschbräu, which had previously held the record with a 31% beer.

The two brewers battled through ever-escalating abvs climbing through 40%, up to 55% with BrewDog’s “The End of History” and then Schorschbräu coming out with a 57% brew dubbed Schorschbock 57% finis coronat opus (The End Crowns the Work) appeared to emerge victorious.

Then, less than a week later, Dutch brewer, Jan Nijboer, went even further and revealed “Start the Future” a 60% effort which largely brought matters to a close in July of 2010.

The conflict seemingly at an end, Brewmeister (presumably waiting for their opponents to exhaust themselves) trumped all with its 65% Armageddon in 2012.

Now the Scots have outdone even their own efforts, what next for super-charged brews?