American football team the Philadelphia Eagles have launched a wine to celebrate their 80th anniversary.

Named “Rollout”, the wine is a Cabernet Sauvignon from Napa Valley and will be available in liquor stores in Philadelphia and New Jersey for a limited time only.

The wine, produced by Cameron Hughes Winery, will also be available from at the team’s stadium, Lincoln Financial Field, at the club suites.

Senior vice-president of business, Ari Roitman, said: “We wanted a special way to celebrate the history of the franchise with our fans. This commemorative bottle is a nice way for fans to celebrate four generations strong of Eagles football whether they enjoy it with friends and family over dinner or save it as a keepsake.”

Priced at $30 a bottle, the wine’s back label says: “Exotic aromatics leap from the glass, demanding your attention, with brooding and intense black fruit essence.”

The Eagles, and their fans, may need a stiff drink this Sunday when they come up against the Denver Broncos – currently on a 3-0 winning streak to the Eagles’ 1-2 and with Broncos quarterback, Peyton Manning, in what some say is the best form of his career.

The Eagles are not the only sporting franchise to have a wine. Baseball team the San Francisco Giants recently launched a sparkling wine for their fans to enjoy and Spanish football team Barcelona launched a Rioja last year.

Many NFL teams do sell wine and beer merchandise, with branded glassware, chillers and wine stoppers (see NY Giants example below) being the most popular.

NFL fans in the UK shouldn’t forget to watch the Minnesota Vikings versus the Pittsburgh Steelers this Sunday.

The game is being played at Wembley. The San Francisco 49ers and Jacksonville Jaguars will also be playing in the UK next month. 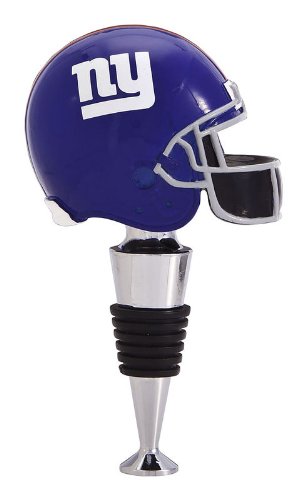 For those unsure who to support (aside from picking the team with coolest logo) the Jaguars are now signed up to play one regular season game in London as a “home” game until 2016.