The Carcassonne headquarters of the Aude Parti Socialiste were bombed on the morning of Wednesday 17 July in an attack thought to be linked to a militant group of winemakers. 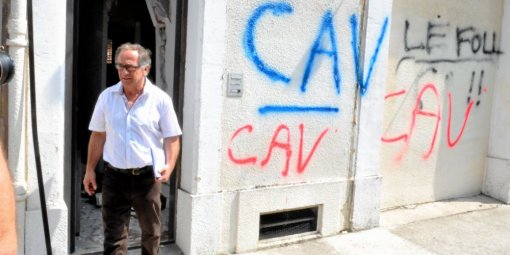 The perpetrators sprayed the letters “CAV” – Comité d’Action Viticole – onto the building in red and blue although no-one has yet claimed responsibility for the attack.

French newspaper Sud-Ouest reported that nine windows were apparently blown out in the school across the road and part of the ceiling of the headquarters collapsed.

Reports in local papers would suggest that a gas canister was used as part of the device.

It was also claimed that a party meeting had taken place hours before but the lateness of the explosion meant that no-one was hurt.

“I am sorry you can always discuss things. I think the people behind this have not realized the danger of their actions.To put a bomb like that in the city centre during Festival de la Cité, at midnight when there are still people in the streets.”

“It has been signed by the CAV but we are trying to identify any claims of responsibility that may explain the act,” he added.

He said it represented, “an unacceptable attack on public liberty and democracy.”

CAV are a group of militant winemakers that have been active since the 1960s, demanding greater protection from the French government against foreign wine imports.

A recent article in Noble Rot Magazine claimed they had even come close to receiving arms and training from General Gadaffi in the heady revolutionary days of the 1970s.

They have struck before, most recently in 2008 when they attacked a building in Narbonne and former president Nicolas Sarkozy was sent a video message when he assumed office in which balaclava-clad men warned him blood “would flow” unless he listened to their demands.