Ornellaia shows off 25 years of evolution

Ornellaia celebrated its 25th vintage release by raising £275,000 last night for the Royal Opera House in London, as well as conducting an extensive vertical tasting. 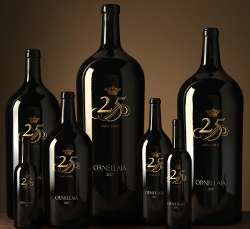 As reported previously by the drinks business, the auction line-up included a unique Salmanazar of the latest 2010 vintage release, as well as double magnums featuring the reflective design created for the Bolgheri estate by Italian artist Michelangelo Pistoletto.

Before the auction, Ornellaia winemaker Axel Heinz hosted a vertical tasting at Sotheby’s, featuring vintages back to 1990 to illustrate the estate’s evolution.

In particular, Heinz stressed the positive impact on quality of increasing vine age, with the estate gradually adapting factors such as oak, extraction and alcohol management to achieve the right balance.

“Today’s wines have more stuffing, more density,” summed up Heinz, who joined Ornellaia as its third ever winemaker in 2005, having worked previously in St Emilion.

With Ornellaia’s vines now aged up to 30 years old, he remarked: “Slowly but surely we’re starting to have a vineyard that’s mature. We’re adapting ourselves and needing to interfere a little less than in the past. We very much feel that we don’t need aggressive winemaking techniques any more, which we would have done when the vines were young.”

Likewise, he suggested: “The refined tannin qualities of the last few years are also linked to the maturity of the vineyards.”

Commenting on the alcohol level in the estate’s 2009 vintage, which Heinz suggested was “14.5% maybe a little higher,” he acknowledged this as a factor that has require particular attention recently.

“What we’ve seen in the last few years has been an acceleration in alcohol levels,” he reported, adding: “I’m still not sure if the rise in alcohol is linked to the youth of the vines and will balance as they get older.”

In order to tackle this issue, Heinz pointed to vineyard management. “You can raise yields, but they’re not all that low at Ornellaia anyway,” he observed, noting that instead “we have been working at reducing the canopy to have less vigorous vines that consume less water.”

Despite these efforts to rein in alcohol levels, he insisted: “In itself, we don’t feel it’s a problem.” To illustrate this confidence, Heinz noted: “We used to maybe have two great vintages in a decade but if we look at the last decade, half of them have been great vintages.”

As the maturing vines have produced fuller styles and the estate has built up a track record of longevity, Heinz marked a shift in Ornellaia’s use of oak. “In the first years it was a little

less daring,” he explained. “You wouldn’t want to put a huge amount of new oak on wines you’re not sure of aging.”

However, since the end of the ‘90s, he reported that the wines typically spend about 18 months in 70% new French oak, using many of the same Cognac cooperages that traditionally supply Bordeaux producers.

Similarly to fellow Bolgheri “Super Tuscan” producer Sassicaia, Ornellaia focuses on Cabernet Sauvignon and Cabernet Franc instead of local flagship Sangiovese. However, Ornellaia distinguishes itself from its neighbour with the addition of Merlot and Petit Verdot.

Following on from an experimental vineyard established in 1995, Ornellaia planted its first Petit Verdot in 2000, incorporating it into their wine from 2003. With just over 7ha of the variety currently planted, Heinz observed: “It ripens very readily and gives good results.”

However, he added: “We’re not able to use a lot in our wine – it’s difficult to go beyond 5%,” explaining: “It adds a touch of rusticity and loses the finesse we want in our wines.”

What’s more, referring to the role this tannic variety plays a blend, Heinz noted: “There’s no lack of tannin structure in our Merlot so it fits a little less for us than in other regions.”

Turning to the performance of Bordeaux’s other varieties in this location, he remarked: “We’re more enthusiastic about Cabernet Franc.” With 10ha of the variety currently planted on the estate, Heinz commented: “It’s a tricky variety and very difficult to remove its tendency towards dilution and greenness, but we seem to avoid that in Bolgheri.”

In a more general observation of the region’s suitability for these grape varieties, Heinz highlighted its predominance of deep, clay-rich soils “that tend to delay ripeness and have a good water supply, which is why we are able to be so successful with Bordeaux varieties in a warm area.”

In common with many of Bordeaux’s top châteaux, Ornellaia also produces a second wine, La Serre Nuove, which it introduced in 1997. At present Ornellaia accounts for about 40% of total production, while the remaining 60% is La Serre Nuove.

Looking to the future, Heinz told db: “We expect to have the proportion of the first wine rising,” adding: “There are vineyards still being used for the second wine that as they age have the potential for Ornellaia so we still don’t know how much Ornellaia we are capable of producing.”

Heinz also marked a contrast between Ornellaia’s approach and that demonstrated in recent years by many Bordeaux producers of increasing prices and diminishing proportions of the grand vin.

“Bordeaux is much more price driven than us,” he argued. “We have a very stable price policy so there’s no need to reduce the number of bottles to justify a high price.”

For all the progress that has been achieved in the last 25 years, Heinz suggested that there were no plans to implement any dramatic changes in the immediate future.

“We’re now entering a phase of consolidation,” he told db. “The vineyard is still evolving but it’s just about to enter a stable phase. We’re pretty clear about what we can do and the most favourable expression of the estate so now it’s all about fine tuning.

As part of this fine-tuning, Heinz confirmed that the estate was starting to explore biodynamic and organic techniques, with around 20ha of its total 100ha currently under conversion. However, he insisted: “It’s unlikely we’re going to have a very dogmatic approach; we’ll let common sense prevail over certification.”

Considering the future of the Bolgheri region more broadly, Heinz highlighted the rapid expansion of vineyard planting from just 350ha in 2000 to around 1,300ha today. However, he noted the limited scope for further vineyard expansion due to the significant area given over to olive trees and protected scrubland.

As a result, he observed: “The advantage that Sassicaia and Ornellaia had was that they could choose the best possible land, although they needed some intuition as they couldn’t know if it would success. Today there is little expansion possible in Bolgheri anywhere as most of the areas have now been planted.”

“It comes up quite often but never in big parcels, usually just one or two cases of different vintages,” she told db, adding that the estate’s wines prove reliably popular regardless of where they are put up for sale.

“There’s global demand,” she confirmed, adding: “It’s one of the few Italian wines that every Chinese buyer knows about.” As for quantities, Sutcliffe commented: “It doesn’t produce as much as someone like Lafite but there’s enough to really make a market.”