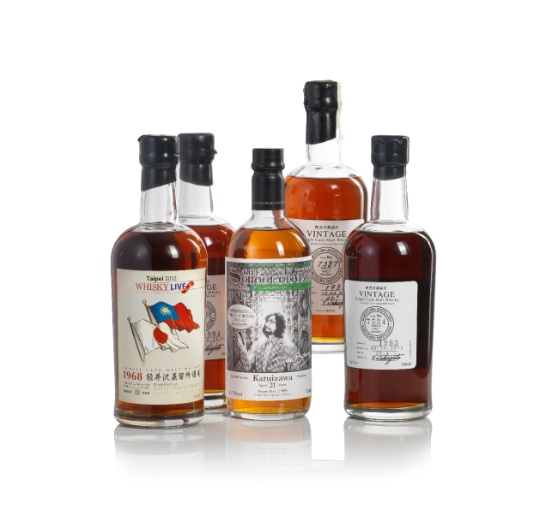 Held on the 23 May, the auction had a particular focus on spirits as well as fine wines – something that marks Bonhams’ sales out from its fellow auctioneers’ – and also saw good bidding for rare Scotch and Cognac.

The best-selling lots of the 30 bottle Japanese collection were a bottle of 1968 Karuizawa (HK$45,220 double its pre-sale estimate) and four bottles of Hangyu Ichiro’s Card Series for HK$22,610.

Top Scotches were a selection of The Macallan, a Lalique-50 year old making HK$261,800 and a 25 year old edition released for Queen Elizabeth II’s Silver Jubilee made HK$65,450.

The wine side of the sale was dominated by Burgundy, particularly the perennial favourite, Domaine de la Romanée-Conti.

“Bonhams have always distinguished ourselves with our pioneering spirit.  We were the first off the block in Hong Kong to sell fine and rare wines, and remain the only auction house to offer single malt whisky and Cognac.

“The successful sale of the Japanese single malt whisky proves that connoisseurs are always seeking new taste and diversity in libations to expand their collections.  We will continue to bring niche wines and spirits to satisfy their thirst for new drinking experiences,“ said Daniel Lam, Bonhams Hong Kong’s wine specialist.