A brewery in New Zealand has caused controversy in the country after putting up a billboard advert, which has been labelled as “homophobic” by some. 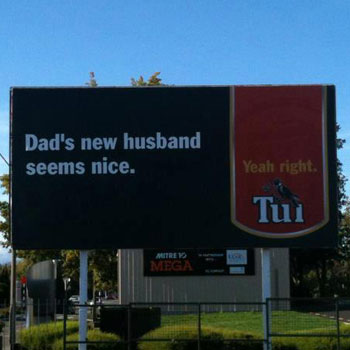 The company said its “Yeah right” adverts have been around since 1994 and that this advert was extending “a long-standing joke around the uncertainty experienced by people whose parent has re-married, to include same-sex couples.”

William Papesch, Tui’s marketing manager, said: ”Given the recent passing of the Same Sex Marriage Bill in Parliament, this ‘Yeah Right’ line is a topical spin at the age-old situation of a parent’s new partner.

But Tui’s Facebook page has attracted a range of comments with some people labelling the advert “a disgrace”, “disgusting” and “offensive”. One user posted an event on the brewer’s Facebook page calling for the billboard to be taken down, she wrote: “We want the Hutt motorway sign taken down as it is disrespecting our gay community.”

Another wrote: “I have always had a good giggle at your billboards as I drive down the Hutt motorway each morning, but I am pretty disgusted by the one I saw yesterday. Homophobia in this day and age? Really??”

However other Facebook users have backed the brewer, saying that they are not offended by the advert. One user wrote: “As a gay man who has fought for equality all my life, I cannot believe the stupidity of people getting upset by the ‘Dad’s new husband seems nice’ billboard… to me it’s not anti-gay, if the billboard said ‘new wife’ no one would raise an eyebrow, why should ‘new husband’ be any different. Some people need to learn to chill.”

Another added: “That sign’s not anti-gay, it’s topical as most of their signs are. Or is any joke where there’s a hint of anything to do with homosexuality offensive or anti-gay now? And does that go for jokes containing anything to do with heterosexuality too? or has marriage equality turned to special treatment and especially no jokes?”