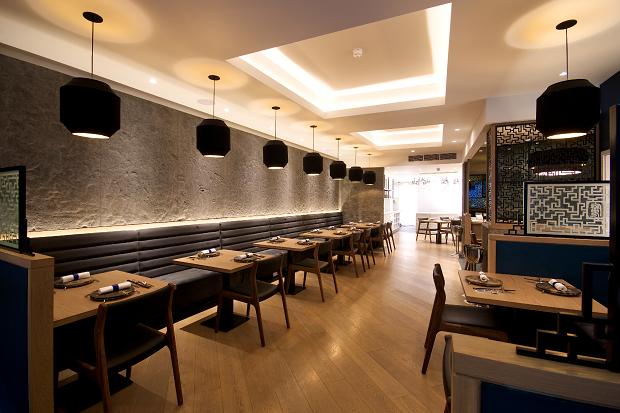 The Demon Chef has landed. Already the holder of two Michelin stars at his Bo Innovation flagship in Hong Kong, Brixton-born, self-proclaimed “Demon Chef” Alvin Leung’s desire to extend his Bo brand to London has been bubbling away for nine years. His dream finally came to fruition last October, when £1m venture, Bo London, opened its doors on Mill Street in Mayfair. Going against the grain of the casual dining trend currently sweeping the capital, Bo London is geared around fine dining, but with a signature Leung twist.

Shunning the terms “molecular” and “fusion food”, the tattooed and once purple and blue-haired Leung, a self-taught chef, is a pioneer of “X-treme Chinese Cuisine”. While inspired and informed by centuries-old Chinese recipes, Bo London’s dishes are exciting, exotic and envelope pushing in the extreme.

Leung seems to enjoy the idea of demonising his diners by taking them down the rabbit hole and holding them captive. The kitchen to him is a playground and ingredients his toys. The resulting dishes are pieces of edible theatre and an evening in Bo London’s clutches as entertaining and enthralling as an opening night at The Old Vic.

Clear your diary for the evening if you’re planning a visit to Bo. At dinner time, guests can opt for either the 12-course Ode to Great Britain tasting menu or the 14-course Chef’s Special. Either way, you’re in Leung’s lair for a minimum of three hours, meaning the restaurant can only cater for 40 covers a night.

Though with tasting menu prices set at £98 and £138 (without wine) respectively, Leung probably isn’t sweating about his bottom line. Don’t go to Bo with a person you need to catch up with, as the relentless flow of dishes cuts through conversation like a knife through warm brie. This is food that commands a Buddhist monk’s concentration levels.

For such a showman, Bo’s interiors are surprisingly low key, presumably to keep the focus on the food. There’s something very Zen about the space, from the low lighting to the stone walls. If I was left alone in the restaurant for long enough, I’d start levitating off my seat.

Thirsty with anticipation, proceedings begin in a suitably theatrical fashion with house cocktail the Baijiu Sour served in an Emperor’s cup with a funnel-like tip you have to bring to your lips. A twist on the Whisky Sour using Chinese white spirit Baijiu made from distilled wheat, the overriding flavour is starchy and saké-like, with elements of sweet citrus, yuzu and melon coming in on the finish in a pleasing union of sweet and savoury.

Opting for the Ode to Great Britain menu, curious to see how Leung’s British roots translate on the plate, the menu kicks off with the morbid sounding Dead Garden. Shovelled into a tiny wooden box, the “garden” is formed from emulsified avocado and green onion in a soil bed of powdered morels punctuated by sprouting stalks of enoki.

Scooping up a spoonful of soil, I’m taken back to the A Taste of Noma pop-up at Claridge’s last August, and Rene Redzepi’s most playful dish (live ants aside), a Peter Rabbit-like plant pot of edible soil. The similarity is so striking, I can’t help but think it’s a hat tip to the world’s number one chef. And why not? Good chefs borrow, great chefs steal.

The feast peaks prematurely at dish two: Bed and Breakfast, crafted from a smoked quail egg wrapped in a crispy taro nest crowned with a generous dollop of oscietra caviar and glinting flecks of gold leaf – a canapé fit for Catherine the Great. What it lacks in size it makes up for in flavour, exploding in the mouth in a thrilling burst of salty caviar, gooey egg and crispy nest. I’d have been quite happy ordering a dozen and calling it a night.

Moving swiftly on, Cloud, Leung’s poke at the dismal British weather, is formed of tiny squares of mackerel hidden under a grey cloud of black sesame, ponzu and ginger served atop a silver bowl billowing with rose-scented dry ice to really hammer home the crap weather message.

Like Bed and Breakfast before it, the tiny mouthful packed a Rocky-like punch, from the oily mackerel to the intense peanut flavour from the sesame, it did what all good dishes do: left you craving for more.

Steak and Kidney meanwhile, was a quintessentially English dish dressed in Chinese clothing. Leung has hired a chef to work on nothing but the xiao long bao dumplings, which are stuffed with steak and chopped kidney and topped with pearls of avruga caviar.

The earthy, renal innards are somewhat at odds with their dainty parcel, but in a twisted way it works. Though not everything in Leung’s line-up delights, with some dishes trying too hard to please. Three incarnations of tomato go from curious to curiouser, with the tomato marshmallow more of a Roald Darl sweetshop prank than anything I’d like to eat again, and the Beans on Toast dessert so far removed from the British original the dish ends up lost in translation.

It’s with the simpler dishes that Leung seems to shine, with an understated coupling of perfectly pink pigeon slices swimming in an aromatic bullion bringing a welcome sense of order to the often chaotic carousel of treats flung our way.

Mention must be made of the wines, which are taken care of by Cedric Beaumond, a dashing, debonair and loquacious Frenchman with an all-consuming passion for Burgundy.

Given the unenviable task of tying to find wines to match with Leung’s crazy flavour combinations, Beaumond deals with the challenge adroitly, pairing Bed and Breakfast with a glass of rich but refreshing Deutz Brut NV Champagne and the Steak and Kidney dumplings with a glass of savoury, gamey and bright Vincent Girardin Volnay 2009.

Proving fine dining and a sense of humour are not mutually exclusive, Ode to Great Britain ends with Sex on the Beach, Leung’s signature dessert. Composed of an edible pink “used” condom made from tapioca and yam filled with a white fluid made from a mixture of honey and ham, the condom comes flung on a bed of sand made from powdered shiitake mushrooms.

It takes a minute to muster the gumption to put it in my mouth and chew. When I do, the sweet, sticky concoction brings little in the way of joy. Sex on the Beach is more about the shock factor than any kind of culinary skill.

Leung is having the last laugh and enjoying watching us squirm, but it’s all part of the theatre and I’m happy to partake in the final act, even if it is without a climax.

Since opening last October, Bo has not been without its critics, with many slamming the restaurant’s high prices and fiddly menu formation. But I think that’s missing the point. Bo delivered one of the most innovative, entertaining and informative dining experience I’ve had in London for a long time.

Yes, it’s expensive, but its aim is to be a treat location rather than a beloved local haunt. London’s fine dining scene is all the richer for Leung’s return to the capital. There are plenty of places to go if you’re in search of classic French or seasonal British cuisine, but there’s no place like Bo.