Red wine is the secret to a long life – at least according to Jersey City centenarian Alice Mospak, who celebrated turning 104 this week, writes Chris Cox. 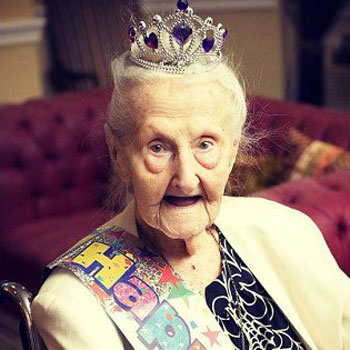 Along with the wine, Mospak, who moved to America from her native Estonia in 1951 and has been residing in Jersey since 1954, also credits chocolate as key in explaining her longevity. And who are we to disagree with someone who worked until she was 92 and claims she still feels so good that she “would like to dance”?

Mospak is not the first to cite a wee tipple as being key to a long, healthy and happy life either: Helen Kimsey, of Tattershall, Lincolnshire celebrated her 100th birthday in February and agrees with Mospak over the power of wine and chocolate, although hers was a glass of white rather than red.

Just last month, Guinness was claimed to be behind Jim Baines, from New Buckenham, Norfolk reaching the century milestone, while in her book “Extraordinary Centenarians in America” Gwen Weiss-Numeroff gathered the testimony of Samuel Ball that “a good wife and two scotches a night” was responsible for him reaching the 102 years of age.

And such claims may not fly quite as much in the face of scientific research as might perhaps be thought.

Another study in the Journal of Alzheimer’s Disease found that just two glasses of apple juice a day reduced the formation of plaques found in the brain of dementia patients – although there was no mention of whether the effect also applied to cider.