Two men have been jailed after being found guilty of excise duty and VAT evasion after trying to smuggle illicit Italian wine into the UK. 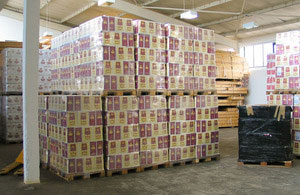 Alberto Mori, 53, was sentenced to seven years imprisonment and Roberto Parma, 54, was sentenced to six years and seven months. The pair imported the wine from Italy and sold it on without paying more than £5 million in duty and VAT.

David Margree, assistant director of criminal investigation, HMRC, said: “The sole intention of importing this wine was to rip off the honest taxpayer to line their own pockets. These men thought they would use crafty code words and complex chains to avoid detection, but HMRC was able to detect and stop this scam.

“HMRC will not stand by while criminals try to cheat the system. The message is clear – HMRC will find you, and you will go to court.”

Parma, owner of I Nobili UK Ltd, imported wine using the UK’s duty suspension scheme, but the Tax Office said the pair exploited the scheme by using the same delivery documents many times. They then avoiding paying duty by diverting the wine from the bonded warehouse, when duty would normally be paid.

Mori, owner of Soldo UK Ltd, a London wine merchant, worked with Parma to sell the imported wine illegally through a network of wholesalers around the UK.

Parma and Mori were arrested in July 2009 after a discovery of more than 114,000 litres of wine during a search. HMRC investigators realised the scale of the fraud after finding records on a company computers and on a memory stick mapping out the fraud. Further investigations found that the pair used Skype messaging to organise the movement of wine and gave code words for drivers to use when picking up the loads, which helped to avoid paperwork going to the right officials.

After being arrested Parma and Mori skipped bail and fled to Italy, but were later found by Italian police and extradited back to the UK in 2012 to stand trial.