Wine most commonly comes from grapes, but some winemakers have been pushing the boundaries of decency by making wine with much more than just fruit. 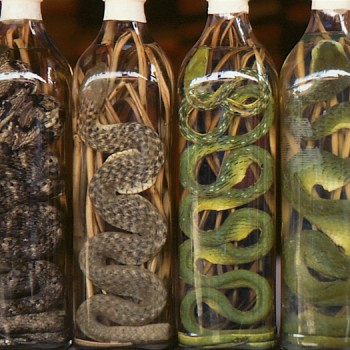 We recently revealed the weirdest ingredients that have been used in brewing beer, and that was definitely not for the faint-hearted.

And earlier this week we reported that tiger bone wine is on sale in China and then db’s senior writer, Lucy Shaw, drank some snake wine at an event in London. 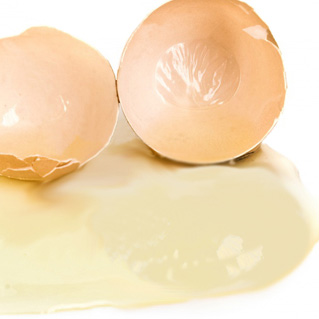 Although not strictly ingredients nor added for flavour, some strange things may have gone through a wine prior to bottling during the fining process. The point of fining is to add something that will create an enzymatic bond with particles in the unfinished wine that cannot or are unlikely to be taken out during filtration.

In the past the rather terrifying sounding “blood powder” was used. Now egg whites, casein, gelatin and the famous isinglass (made from fish swim bladders) are more common.

Other fining agents include bentonite clay and charcoal – which is apparently particularly good at removing phenols that contribute to off-colouration and bad odours. 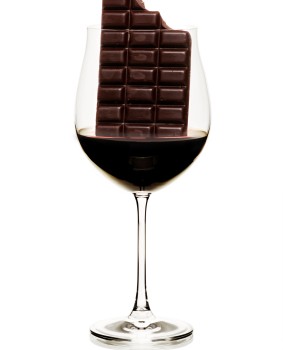 Many red wines boast notes of chocolate and last year db navigated the minefield of matching wine with Easter chocolate, but this is wine that is made with chocolate.

As we have previously reported, a chocolate infused wine called Chocolate Shop has seen a surge in demand across the US and UK. The Chocolate Shop is owned by Washington-based Precept Wine and was launched in January 2011 in the US using a Bordeaux blend from California, mixed with sugar and natural chocolate. For the UK market, the base wine is a Tempranillo from Spain, while Shiraz is used in Australia. Precept Wine has said it will be experimenting with the development of new flavours, such as a white chocolate, caramel and Chardonnay combination. 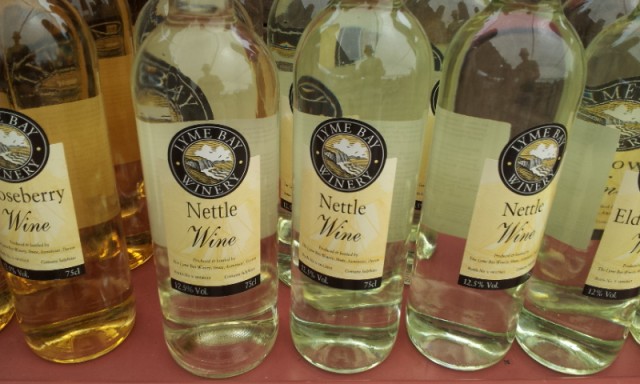 If people will eat naga chillies then drinking nettle wine might not seem too strange, maybe. But aficionados of nettle wine, which is popular among home winemakers, will tell you that while the plant is known for its stinging properties, those do not transfer into the wine.

Nettle wine is actually made using the small flowering buds that appear at the top of the plant. These are edible, although it is recommended that anyone picking these buds wears gloves to avoid hours of pain and itching. It is often advised that those making nettle wine infuse it with extra ingredients such as ginger root, parsley or lemon thyme as straight nettle wine “lacks character”. The good news is that you don’t need to have a glass of dock leaf wine on hand when drinking nettle wine. 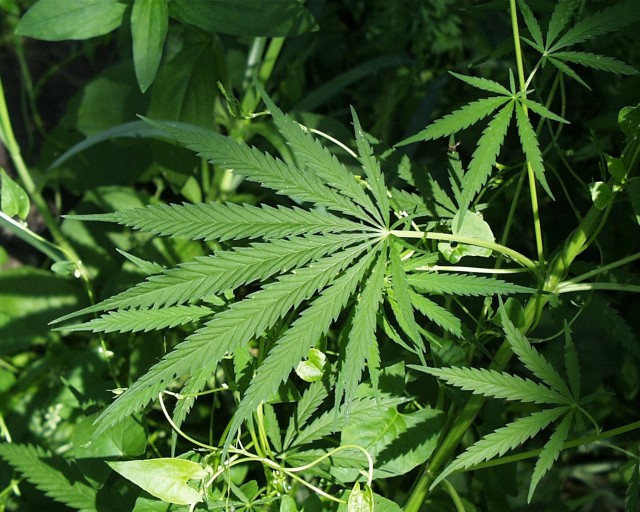 Like chocolate wine, cannabis wine has become popular in the US with a number of Californian winemakers producing this potent drop. Cabernet Sauvignon is proving to be the grape variety of choice.

According to Crane Carter, president of the Napa Valley Marijuana Growers, pot wine delivers a quicker high than pot brownies, and the combination of alcohol and marijuana produces “an interesting little buzz.” 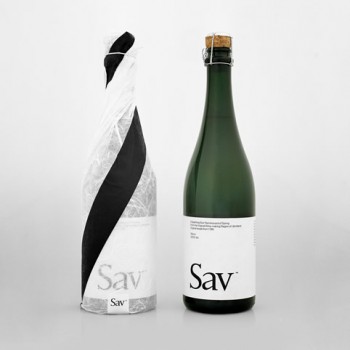 According to John Wright, a forager author, birch sap tastes almost exactly like water, “but the freshest water you have ever tasted, with just a hint of sweetness”. In Sweden, Sav winemakers produce a sparkling wine using a birch sap recipe from 1785.

Sav Sparkling is produced according to the “méthode traditionelle” and is fermented for two years in the bottle. 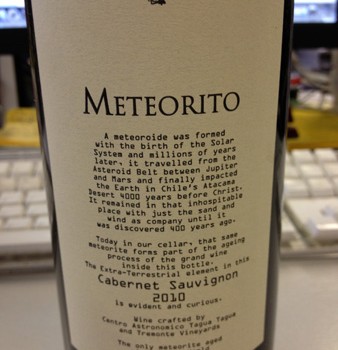 A Chilean wine has been created using a meteorite formed during the birth of the solar system. The Cabernet Sauvignon called Meteorito has been developed by Ian Hutcheon, an Englishman working in Chile.

The meteorite, which is believed to have crashed into the Atacama Desert in northern Chile around 6,000 years ago, is submerged in the wine during the fermentation process.

Hutcheon believes the meteorite gives the wine a “livelier taste”. 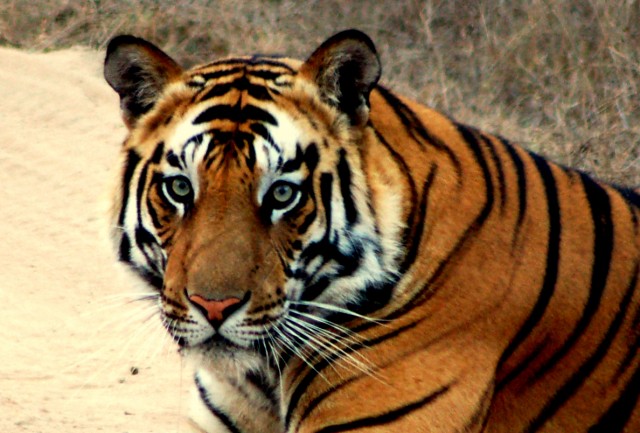 As reported earlier this week in db, tiger bone tonic wine is still available in China, despite the practice being illegal in the country since 1993.

Tiger tonic wines are produced by leaving tiger bones to soak in the wine for varying lengths of time, the bones are then removed before bottling.

The wine, which in China is believed to have medicinal properties, sells for between £65-£500 a bottle depending on how long the tiger bone was in contact with the wine for. 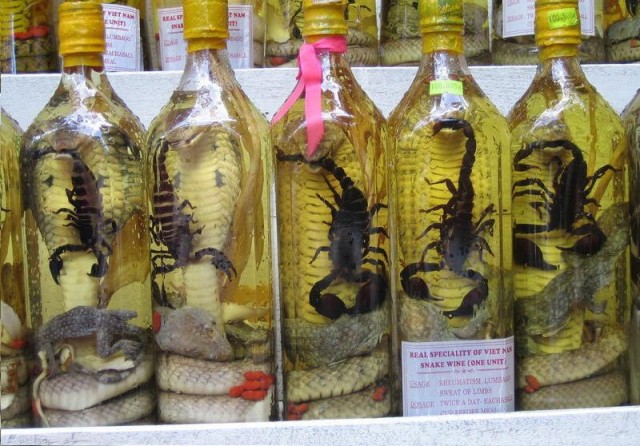 Snake and scorpion wines are found throughout China and South East Asia and are made by infusing the reptile in question in rice wine, but they can also be infused in grain alcohol. Sometimes snakes and scorpions are combined in the same wine and lizards and geckos can be infused in wine as well.

Like tiger bone wine, snake wine is believed to have medicinal properties helping with everything from eyesight to hair loss and sexual performance. Venomous snakes are often used and are left to steep in the wine for many months.

Other parts of the snake are also used in wine including blood, bile and gall bladder. 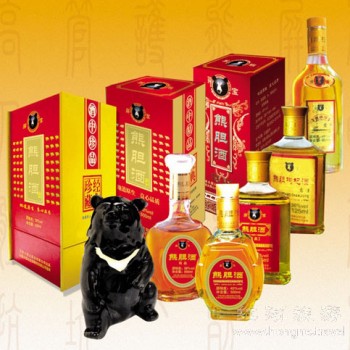 The bear bile used in this wine has to be fresh and is obtained from live bears, a practice which has drawn much criticism from animal rights campaigners as the bears are often kept in very distressing conditions.

The bile is then mixed with the wine and Chinese cassia, jujube, orange peel and fennel seed are added, this presumably makes the wine taste better.

This is another wine thought to have medicinal benefits, with Pingbian Bear Bile Wine claiming it can “help keep the liver and gallbladder healthy, dissolve gallstones, reduce inflammation and swelling, relieve pain, and clear away heat and toxic materials. It also has certain curative effects for high blood pressure, hyperlipemia, and cardiovascular disease.” 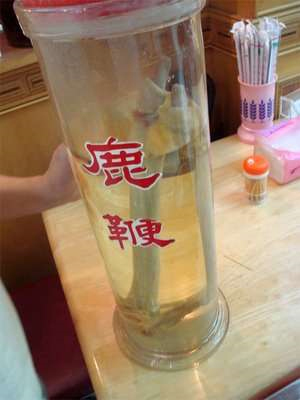 According to traditional Chinese medicine, for deer penis to retain its beneficial properties it must – horrifically – be extracted from the deer while it is still alive.

It is claimed that prior to the 2008 Beijing Olympics athletes were told not to drink deer penis wine, because it may contain certain banned substances including ephedrine. The wine is said to be an effective remedy for athletic injuries, and other benefits are thought to be enhanced sexual virility, aiding joints and making pregnant women (and their baby) stronger.

The wine sells for anything from US$12 a glass up to $450 for a bottle and is also thought, by some, to be an aphrodisiac. 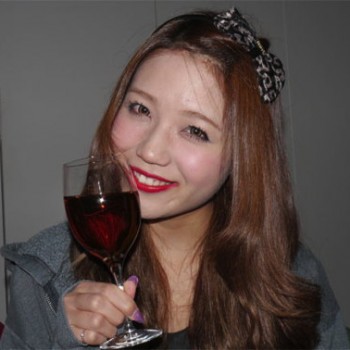 Japanese website RocketNews24 claimed to have tracked down a Korean wine, known as Ttongsul, which is made primarily using human or animal faeces. The website claims Ttongsul is made using a Korean distilled grain alcohol, called soju, so technically it is not a wine.

The faeces are soaked in the soju with medicinal herbs for three to four months until it ferments. It is thought Ttongsul can help broken bones to heal and can cure illness – personally this scribe will stick with a cast and some paracetamol.

RocketNews24 gave the drink to a Japanese girl band to taste, one of whom said: “This is really good, and easy to drink. I think this could be a hit with girls.”

Err, no thanks, some people are happy drinking crap wine, but this is going too far.