Two former AOL executives are using their winery as a social enterprise project to establish the US state of Virginia as a major presence on the world wine map. 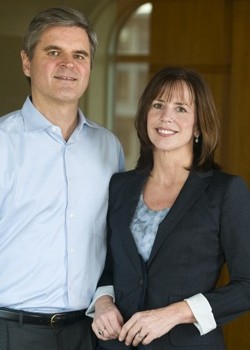 After more than two decades leading marketing and branding for the US software giant, Jean Case and her husband Steve, who co-founded AOL, have since dedicated themselves to philanthropic investment programmes under the banner of The Case Foundation, which they set up in 1997.

Although resident in Virginia for 30 years, Jean Case admitted it was only recently that she recognised the quality of the state’s wine production.

“We went on a trip and tasted some really wonderful wines,” she told the drinks business. “It played into a passion of ours; we’re always looking for the next big opportunity.”

As a result, the couple bought a 300-acre property near Charlottesville in 2011, renamed it Early Mountain Vineyards and carried out extensive renovation work on the vineyards and visitor centre before reopening to the public last year as a major showcase for Virginian wines.

Under the banner “Best of Virginia”, Case explained that they “hand select and curate partners”, whose wines are available to try in the Early Mountain Vineyards tasting room.

With membership currently numbering seven producers out of Virginia’s 220 wineries, Case suggested that admission would stay “pretty fluid”, with the option to feature additional wineries on a shorter term basis for specific focus events such as a Viognier showcase.

“The real goal is to make Virginia known as a world class wine region,” she outlined, explaining: “Having leaders working together will lift the boat. A lot of producers who have been pioneering for decades are now linking arms.”

As a social enterprise project, not only will all the profit from Early Mountain Vineyards’ own business be channelled into the promotion of Virginia’s wine industry, but the couple have made a further commitment to invest ahead of profit.

“We’ve been involved in a lot of different businesses but never in one so supportive,” remarked Case. “That really gave us the idea to strengthen the industry through investment.”

Outlining some of the initiatives by which they aim to achieve their goal of boosting Virginia’s wine reputation, Case listed priorities such as “bringing winemakers together to discuss learnings and vineyard practices, holding blind tastings and looking at practices in emerging and old world regions. We can all learn from each other.”

She also pointed to a potential more wide-reaching goal of this collaborative approach as helping to establish a more official framework for the state’s growing number of producers. “We all feel we need to embrace a set of standards, whether formally or informally,” Case observed.

As for the areas of greatest potential for Virginian wine, she acknowledged: “We’re still a young region – a lot is still being figured out in terms of what’s going to emerge as a leader.”

However, she highlighted particularly promising results from Viognier and “a lot of interest” in Petit Verdot and Cabernet Franc, adding: “One of our producers, Ankida Ridge, has brought forward a really wonderful Pinot Noir.”

While the majority of visitors to the state’s wine country currently come from the local area and Washington DC, which is about 1 hour 40 minutes away, Case also pointed to growing interest from export markets.

“The UK has been a great market for Virginian wine and China too,” she remarked, suggesting that a number of producers were likely to attend this year’s London International Wine Fair.

Summing up the aims of the project, Case concluded: “This is about getting recognition for the region more broadly, making people understand we have really beautiful wines here and giving people the opportunity to experience those wines.”