A whisky bottle holding more than 9,000 drams has been declared the largest in the world. 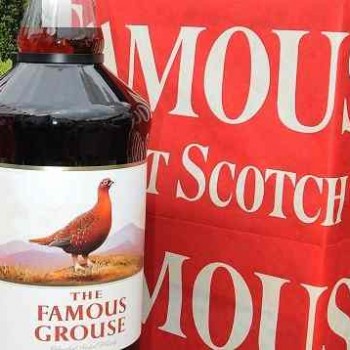 The bottle stands at 5ft 5in tall and took three hours to be filled with The Famous Grouse blended whisky. It surpassed its 200-litre target by more than 10% and holds the equivalent of 9,120 drams of whisky and was awarded the Guinness World Record on Sunday as the brand celebrated its 107th birthday.

It will be on permanent display at The Famous Grouse Experience at the Glenturret Distillery in Crieff, Perthshire.

Glen Gribbon, director of The Famous Grouse, said: “We have been gearing towards this momentous day for a long time and it’s been extremely nerve-wracking for all involved. We are so thrilled to bring this record to the home of Scotch whisky and are relieved that it’s now official – we have the biggest bottle of whisky in the world.

The bottle was handmade in the Czech Republic by glass manufacturers BOMMA and has travelled more than 1,200 miles from Svetla, near Prague.

The Famous Grouse takes the world record from Jack Daniel’s, which entered into the Guinness World Record Book last year by producing a 184-litre bottle.