Team GB’s women’s beach volleyball duo has finally been announced as Zara Dampney and Shauna Mullin – much to the pleasure of American Craft Beer brand Fordham. 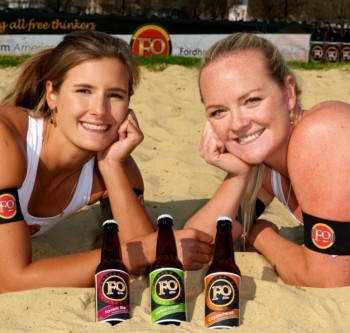 Fordham began sponsoring the girls in January 2012 to help finance their training and support their journey to qualify. Having spent the last six months on the worldwide competition circuit, Zara and Shauna will now take part at London 2012.

Fordham, which features a distinctive “FO” logo on its bottles, has rebranded the sport as “FOlleyball” in a drive to persuade the British public to take up the game as well as enjoy the beer range as part of their “Try Something New” campaign.

Graham Richardson, general manager of Heathwick, said: “We are delighted for Zara and Shauna. They’ve worked so hard to qualify as Team GB and deserve all their success. There’s going to be a real buzz around Beach Volleyball in London and right across the UK this summer, with the Olympics giving this fresh and exciting sport a high profile.

Shauna said: “Representing Britain at the Olympics is a dream come true for us.” Zara added: “We’re extremely grateful for Fordham’s support, which has made it possible for us to focus on playing the best volleyball we can.”