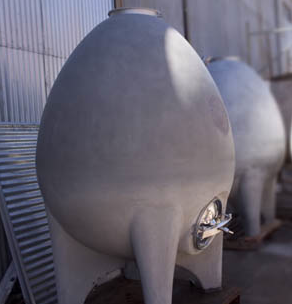 Although Signos de Origen already has a small presence in the UK, Emiliana, a Concha y Toro subsidiary which currently owns 1,100 hectares of certified biodynamic and organic vineyards in Chile, now plans to launch the range officially in the UK next March.

Describing concrete eggs as “the perfect shape”, Emiliana’s commercial director Cristian Rodriguez, told the drinks business: “We think we will express very good fruit in a better way; it won’t be covered with barrel wood from the beginning.”

Although the wines will spend some time in barrel towards the end of their maturation, Rodriguez described the overall style as “softer with much more fruit” as a result of this vinification technique.

Emiliana’s early adoption of concrete eggs is thanks to its consultant winemaker, Alvaro Espinoza, who first brought these vessels to Chile in 2009. They have since emerged as an increasingly popular choice for winemakers around the world.

With an RRP of around £13, the range will feature five wines from five specific blocks “because biodynamics is all about terroir”, explained Rodriguez.

This will include a Cabernet Sauvignon from Las Moras in Maipo; a Carmenere from Los Robles in Colchagua; a Syrah from Rincon de Penas in Casablanca; a Pinot Noir from “clone 7, block 7” of one of Emiliana’s estates in Casablanca, and a white blend of Chardonnay/Viognier/Roussanne/Marsanne from La Vinilla in Casablanca.