Sales of English sparkling wine in the UK are set to hit 5 million bottles by 2015, according to Ridgeview winemaker Charlie Holland.

“It’s a nervous and exciting time for English sparking winemakers – sparkling wine now accounts for 50% of plantings in the UK,” Holland told the drinks business at the London International Wine Fair this week.

There are almost 400 vineyards in the UK now, almost double that of 10 years ago. But despite the recent boom, Holland stressed the importance of distinguishing English sparking wine from Champagne.

“We have a unique terroir that makes English sparkling wine special. It’s more expensive to produce than Champagne, the cost of land is higher and yields are lower.

“It’s a fallacy to say you can’t ripen grapes in England. We’re a very cool climate region, but this allows for a long growing season, helping grapes develop full phenolic ripeness, a full flavour profile and natural sugars,” he said.

“English sparkling wines have a lovely leanness and freshness, with signature citrus flavours and naturally high acidity, which is crucial for sparkling wine,” he added.

In terms of ageing potential, Holland admitted that because the winery was only founded in 1994, he doesn’t know how long the wines will last.

“I tried the 2000s recently and they still taste so young and fresh,” he said, revealing he would consider offering late disgorged versions of some of the cuvées in the Ridgeview range as the wines age quickly under cork.

He also revealed that vine age is incredibly important for English sparking wine, and that at 17 years old, the Ridgeview vines are in their prime.

“English sparkling has had a lot of good press, and consumers want to find out what the buzz is all about. It also fits with the trend for buying homegrown products,” he said.

The Ridgeview range is named after London boroughs, such as Knightsbridge and Fitzrovia, as a tribute to Christopher Merret, the 17th century English physician credited by many with inventing sparkling wine before French monk Dom Pérignon. 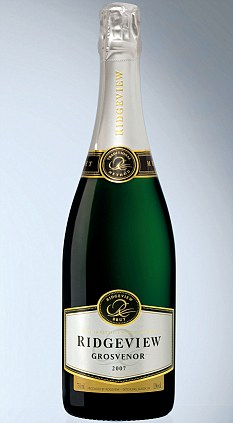 Holland is keen for “Merret” is be used as catch-all term for English sparkling wine.

“Merret has been put forward but the topic is still under discussion. I’m hoping we’ll come up with a word for English sparkling wine soon, as it doesn’t exactly roll of the tongue,” he admitted.

Despite the winery’s success in the UK, exports now account for 20% of Ridgeview’s sales.

“Exports are a massive thing for us. We’re seeing great success in New York, Holland, Belgium, Japan, Hong Kong and Australia – there isn’t the same stigma there for English sparking as we’ve experienced in France, Spain and Italy,” he said.

Asked whether he’d ever consider a non-vintage, Holland admitted that he doesn’t have enough reserve wines to be able to make one.

“We’re very much a vintage-based property. Every year has a story to tell and we’re keen to express that, but we work hard to try to make a similar tasting product each year and have to adapt our winemaking to the specifics of the vintage,” he said.

In terms of grapes, Holland revealed that Chardonnay “grows brilliantly”, but that Pinot Noir and Pinot Meunier were both “swines to grow” and very “sickly” grapes.

“Trying to get a decent crop from either of the grapes is challenging – Pinot Noir is the most expensive grape to buy, and hardest to get hold of,” he said.