Four men in Australia took extreme measures to get out of paying a bar bill. 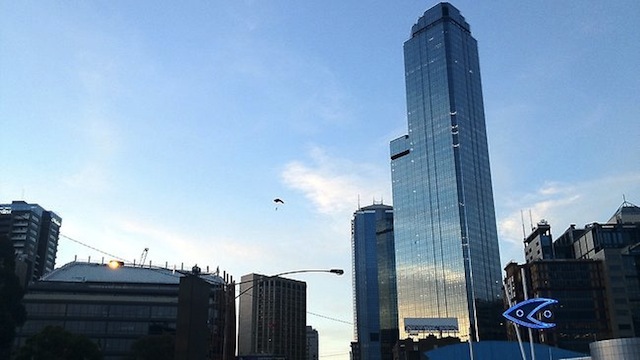 After ordering drinks, the men dressed in business suits jumped over the balcony of the bar, which is in the tallest office building in the Southern Hemisphere.

The four had parachutes hidden under their suits and a getaway car waiting for them when they landed after plunging 800ft from the Rialto Towers in Melbourne.

Bar owner Shannon Bennett explained that each man had ordered a gin-based Negroni cocktail at £14 a pop before the stunt.

‘I ran from the kitchen into the room and I just saw a flash of them jumping over, and at that stage none of us knew what the hell was going on,’ he said.

‘They had cameras on their helmets so I’m sure we’ll all see it on YouTube pretty soon.’

The bar owner did chase after the men but they were too quick and got away with their well-planned stunt.

Three of the men landed safely on the ground, while the fourth had to be helped down after becoming entangled in a tree.