Wine in cans selling out Stateside

Young Americans are developing a thirst for wine in cans, according to Ben Parsons, owner of Denver-based urban winery The Infinite Monkey Theorem. 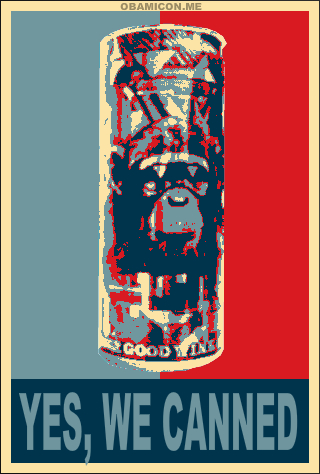 Local retailers have been selling out of Parsons’ US$6.99 Sparkling Black Muscat in a 250ml can, emblazoned with the brand’s eye-catching monkey logo.

The British-born winemaker launched the can last July with a reworking of the iconic Barack Obama blue-and-red “Hope” poster, with the tag line: “Yes, we canned.”

“I’ve always wanted to put wine in a can,” Parsons told the drinks business. “They’re user-friendly, recyclable, and cut through the pretension of wine. It’s a perfect fit for the brand.”

Targeting the can at Millennial drinkers and generation X’s aged 21 to 40 has paid off.

“It’s ideal for music venues, and I’m in talks with Virgin Atlantic to try and get it onto their in-flight wine list,” said Parsons, who admitted the wine won’t age: “It’s got a one-year shelf life like any other can.”

The entrepreneurial winemaker is planning on going national and would like to take the can internationally in the near future, saying: “I’d love to see it in London nightclubs and vending machines in Tokyo, why not?”

The stumbling block is its 250ml size, which is an illegal size for selling alcohol in some US states.

“I’m petitioning to allow it as a wine container size in all US states, it’s a crazy law,” said Parsons, who is about to unleash a canned sparking Syrah and Pinot Gris onto the market.

Surprisingly, given its peony pink colour and sweet flavour, Parsons has found the wine to be a huge hit with men, much to his delight.

“I want to change the people’s perception of wine and make them see it as an everyday drink. I’d like to see more producers put their wines in cans so it becomes more acceptable,” he said.

For more on wine packaging innovations see the January issue of the drinks business.