In these days of bright, airy gastropubs, London’s dark, grubby City boozers feel somewhat past their sell by date. 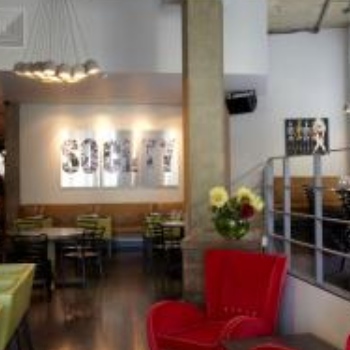 Gradually the landscape is changing to reflect demand – as illustrated by the demise of Balls Brothers, currently receiving a makeover from its new owners Novus Leisure, and the arrival of new faces, notably the clutch of venues set up during the past year by Drake and Morgan.

Tucked away down a Dickensian alleyway near Blackfriars is another fresh competitor for the City’s disposable income: Society.

Alarmingly, neither bar nor restaurant seemed to be doing any business on our visit, but then perhaps it was the wrong part of town to be looking for nightlife on a Monday.

That said, a combination of a back alley location and a low key online presence – a website does exist but a spot of search engine optimisation wouldn’t go amiss – may help explain why we were the only people in the place all evening. Certainly the food deserves a bigger audience.

While pondering over the menu, we took pity on the under-employed barman and ordered cocktails. Given £8 seems to be the standard cocktail price in most London bars, these delivered above average, with Hendrick’s Gin adding a subtle twist to my Bramble and the Spiced Mule not too punchy for an aperitif.

The wine list was respectable without showing any particular signs of flair. Despite a lack of any vintage indication, it offered plenty of safe choices at various price points, including five of both red and white options by the glass.

I started with a glass of reasonably priced (£4.60) Côtes du Rhône from François Bour, which proved this region’s reliable consistency with its easy-drinking savoury, dark southern Rhône fruit.

My chicken liver paté was served with no embellishments, allowing the generous portion of silky smooth, whisky-enhanced paté to shine confidently alongside some tasty spiced pear chutney and lightly toasted brioche.

The kitchen showed off its presentation skills rather more with my friend’s tuna niçoise, which arrived with elegantly laid out slivers of perfectly pink tuna resting on bright greens and glistening soft boiled eggs.

For the main course, I opted for a trio of rustic lamb and mint sausages with white bean stew, topped with melted gruyère cheese and a dollop of redcurrant jelly.

The sausages were delicious in both flavour and texture so that I wished I’d done a full day’s farm labour to generate the appetite required to finish this entire dish.

Once again, my friend’s dish of duck breast with creamed spinach, honey glazed parsnips and Port jus lent itself more to dainty presentation. As with the tuna, the duck was served perfectly pink and juicy.

While my friend contented herself with a second glass of bankable pub wine, the £3.60 Il Banchetto Sangiovese, I tried the Cabernet Sauvignon/Carmenere blend from La Fonda.

The familiar green pepper notes on the nose were toned down by the Cabernet, which in turn was softened by the Carmenere to give a ripe, slightly chocolatey New World crowd-pleaser.

We finished off with a distinctly superior cheeseboard. The kitchen could only confirm that it came from nearby Smithfield Market, but the selection featured Neal’s Yard quality Ardraghan, Colston Bassett Stilton, Montgomery Cheddar and Ragstone goats’ cheese, enhanced by plenty of celery, biscuits and membrillo.

Perhaps on a Friday night this place is buzzing. One wonders if the kitchen could keep up this high standard under greater pressure and whether noisy chatter on top of the fairly loud music would make for a deafening dinner.

Both might be a sacrifice worth paying for the reassurance that Society was getting the footfall it clearly deserves.