Police were forced to intervene and the president of the IDVP was dismissed after demonstrators attacked the Regua offices of the Port Wine Institute last week. 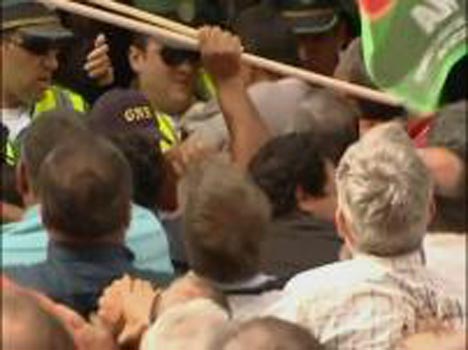 Following Wednesday’s attack on the IDVP’s offices, which saw windows smashed, the Portuguese government intervened on Friday by suspending its president, Luciano Vilhena Pereira, hastening his planned departure this October.

Vice-president Paulo Meneses Osório has taken charge until a permanent replacement can be found.

The violence marked a peak in tensions, which have been growing since the end of July, when the licence per hectare permitted for Port production, or beneficio, was cut dramatically to 85,000 pipes from its 2010 level of 110,000 pipes.

With one pipe equating to 550 litres, the 2011 beneficio is expected to create a shortfall of 2.7 million cases, or 30%, in production compared with this year’s total Port sales.

Speaking to the drinks business, Paul Symington, managing director of Symington Family Estates, outlined the concerns of the Douro protesters.

“Many Douro farmers made losses in 2010 and this reduction in Port production will push some into bankruptcy and will inevitably lead to some abandoning their vineyards,” he explained.

Although accepting that the recession created oversupply in recent years, Symington warned: “This substantial cut in production will virtually eliminate any trade over-stock for 2012 and could eventually lead to some shortage of younger wines needed for ruby and reserve Ports.”

Having highlighted the issue of European retail consolidation in db’s July 2011 issue, Symington used this wider context as further explanation of the pressures facing the Douro’s growers.

“There is no doubt that the constant pressure on Port prices and margins across the major European markets is part of the cause for this social unrest that is now appearing in the Douro,” he observed.

To compound these problems, Symington also noted “the sharp increase in the cost of wine brandy used to fortify Port.

“The gradual withdrawal of the EU subsidy on distillation has increased the cost of brandy by over 25% from 2010 to 2011.”

Earlier this year, Adrian Bridge, CEO of The Fladgate Partnership, expressed his own concern at the likely consequences of mounting pressures on the Port industry, warning of further consolidation “in the next 18 to 24 months.”

Speaking on behalf of his own business, Symington remarked: “We are very concerned about the economy of the region and are doing our best in the context of what a company can do for our farmers.”

However, he criticised the Portuguese government’s longstanding failure to protect the livelihoods of the Douro’s 30,000 farmers, saying: “The government allowed increased planting, which has been very serious for existing farmers.

“Nobody in the government seems to have been paying much attention to Port, even though it’s a beacon for Portugal.”