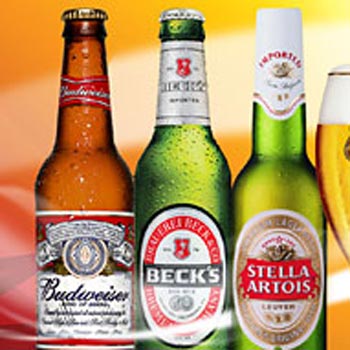 Net profits at the producer of Budweiser, Stella Artois and Beck’s rose to US$1.45 billion in the three months to the end of June, up from US$1.15bn a year ago but short of analyst forecasts of US$1.5bn. Sales reached US$9.95bn, compared with US$9.17bn in 2010.

The world’s largest brewer saw core profits lifted despite struggling sales in its key markets of Brazil and the US.

The company said that US shipments slipped 1.7%, while sales to retailers fell 3.4%, hit by bad weather and by high petrol prices.

Its market share in the country also fell by 0.5% as the brewer continued its strategy of increasing the prices of its cheaper brands in an effort to encourage consumers to purchase more premium products.

In Brazil, beer volumes fell 2.6% due to low growth of disposable income, and because of tough comparisons with the second quarter of 2010, which was boosted by the football World Cup.

AB InBev sells roughly three-quarters of its beer in the Americas, and around 40% of its total beer sales come from Latin America.

The weaknesses in traditional markets were partially offset by a 12% surge in demand in China, which helped boost global beer volumes by 0.3% to 90m hectolitres.

Speaking of the company’s performance, Stuart MacFarlane, AB InBev’s UK president, said: “These are interim figures which include exceptional elements as we compare our performance against the effects of the 2010 FIFA World Cup and account for the termination of a number of legacy commercial product contracts.

“Overall, the underlying picture remains strong. We continue to consolidate our focus around core brands most recently announcing a significant sponsorship deal to support The FA Cup over the next three years.

“In addition, the success of Stella Artois Cidre which has developed a 16% share of the off-trade premium cider segment in its first 12 weeks, builds on our strong track record of innovation.

“This focus on our core brands, and continued innovation, is a proven strategy that has delivered strong performance in the face of unprecedented economic challenges and duty increases over many years.”